Skip to content
Over 1M Answers Available › Category: Biology › What is Pinocytosis?
0 Vote Up Vote Down

Pinocytosis Process
Pinocytosis is initiated by the presence of desired molecules in the extracellular fluid near the cell membrane surface. These molecules may include proteins, sugar molecules, and ions. The following is a generalized description of the sequence of events that occurs during pinocytosis.
Basic Steps of Pinocytosis 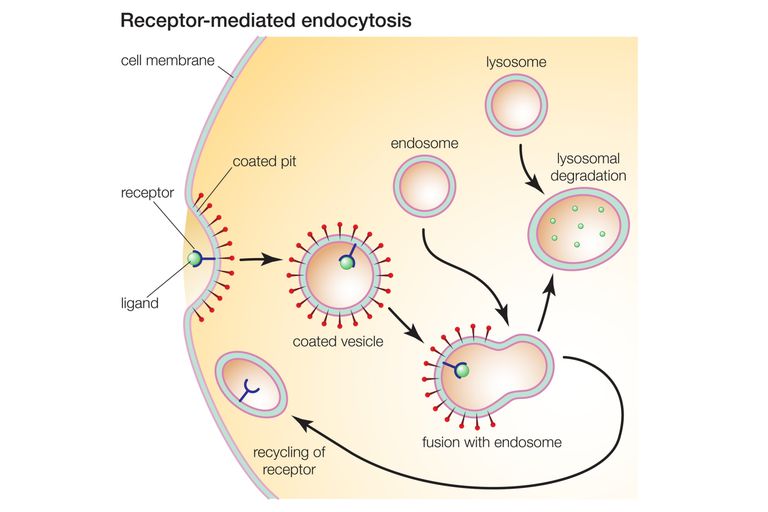 Receptor-mediated endocytosis enables cells to ingest molecules such as protein that are necessary for normal cell functioning. Encyclopaedia Britannica/UIG/Getty Images

While pinocytosis is a sound process for taking up fluid, nutrients, and molecules non-selectively, there are times when specific molecules are required by cells. Macromolecules, such as proteins and lipids, are taken up more efficiently by the process of receptor-mediated endocytosis. This type of endocytosis targets and binds specific molecules in extracellular fluid through the use of receptor proteins located within the cell membrane. In the process, specific molecules (ligands) bind to specific receptors on the surface of the membrane protein. Once bound, the target molecules are internalized by endocytosis. Receptors are synthesized by a cell organelle called the endoplasmic reticulum (ER). Once synthesized, the ER sends the receptors along to the Golgi apparatus for further processing. From there, the receptors are sent to the plasma membrane.
The receptor-mediated endocytotic pathway is commonly associated with regions of the plasma membrane that contain clatherine-coated pits. These are areas that are covered (on the side of the membrane facing the cytoplasm) with the protein clatherine. Once the target molecules bind to specific receptors on the membrane surface, the molecule-receptor complexes migrate toward and accumulate in clatherine-coated pits. The pit regions invaginate and are internalized by endocytosis. Once internalized, the newly formed clatherine-coated vesicles, containing fluid and desired ligands, migrate through the cytoplasm and fuse with early endosomes (membrane-bound sacs that help sort internalized material). The clatherine coating is removed and the vesicle’s contents are directed toward their appropriate destinations. Substances acquired by receptor-mediated processes include iron, cholesterol, antigens, and pathogens.
Receptor-mediated Endocytosis Process
Receptor-mediated endocytosis allows cells to take up high concentrations of specific ligands from extracellular fluid without increasing the volume of fluid intake proportionately. It has been estimated that this process is greater than a hundred times more efficient at taking in selective molecules than pinocytosis. A generalized description of the process is described below.
Basic Steps of Receptor-mediated Endocytosis

Adsorptive Pinocytosis
Adsorptive pinocytosis is a non-specific form of endocytosis that is also associated with clatherine-coated pits. Adsorptive pinocytosis differs from receptor-mediated endocytosis in that specialized receptors are not involved. Charged interactions between molecules and the membrane surface hold the molecules to the surface at clatherine-coated pits. These pits only form for a minute or so before being internalized by the cell.